A thousand stories about Espoo 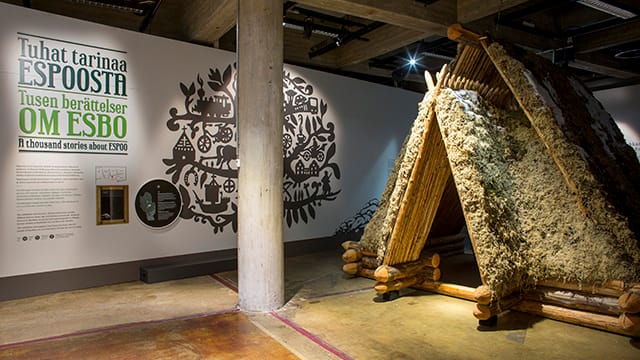 ‘A Thousand Stories About Espoo’ is made for people who seek joy, knowledge and excitement in history. The exhibition tells different stories from Espoo - about its people and many destinies, of villages and manors, parties and every day life. At the same time these stories tell about Finns and Finland and how Espoo became the second largests city in Finland.

The exhibition delights visitors by providing many different approaches to the past. The rich array of exhibits, entertaining and surprising technical solutions, multimedia and films, a scale model of the village of Mankby and many functional opportunities, such as the opportunity to try out a bow drill at the Stone Age house, offer visitors to the museum a new kind of exhibition experience.

The visitors travel from the Stone Age to the world of manor houses, early industry and the new wonders of technology. From a glassworker’s cottage to a bootlegger’s business, we move to a swiftly growing, modern Espoo saturated with consumer goods. The exhibition displays items and phenomena connected to the lives of very different people. Visitors see both the medieval gold ring from Espoo, stationary engine, which so excited farmers, and the elegant opulence of a baroness, and sharp-eyed visitors may even spot the ghost of Alberga Manor.

Exhibitions visitors can also watch the short film Searching for the Red Moose – a mission in Espoo. “The film is about the changes the Espoo landscape has undergone in the past century. The Original Espoo Resident, who is looking for signs of his own hand, encounters odd settlers in the most extraordinary places,” says the film’s scriptwriter and director Joonas Schwanck.

The exhibition involves a large selection of functional services, such as guided tours and birthday packages. The delicious menu for visitors has something for everyone, including families, seniors, people hungry for history and school groups.